So many of you know, I do have another job besides photography. And my Boss called me into her office today (and I have to admit, I was starting to get a little nervous, ha!)
And she was like ‘SYDNEY! THESE ARE YOUR PICTURES!’

Sure enough…she was holding this magazine… Which you may be like, ‘Sydney, really?’ BUT COME ON! I am excited. So be EXCITED! Its my first feature…and though its technically not a ‘feature’ I am totally labeling as that. Yeah!

Magnolia Lakes featured my photos from Inmar&Belkys’ Wedding in their ad! Whoo! They had spoken with me a few months ago about the possibility, and now here it is…. 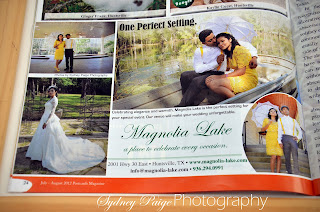 And yes…SYDNEY PAIGE PHOTOGRAPHY is listed as the photographer between the first two pictures. (Click the picture to make it larger).

So…Postcards Magazine…NEXT Vogue. (In the words of my co-worker David). :]

But for now, I am happy and excited for new adventures this advertisement may bring!

THE HALVES OF US – Cover Reveal Day!